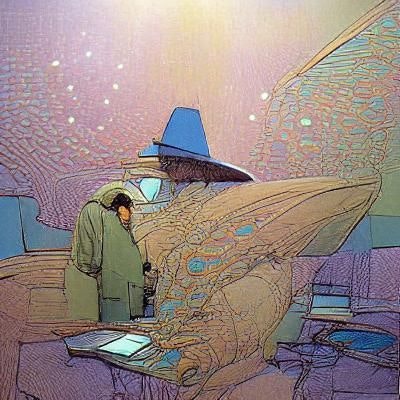 If you'd like to back this project, all you need is an Ethereum address and to click on the crowdfund block below. Instructions about both can be found later in this post.

Let us know you backed the crowdfund!

Sometimes it's easy to identify backers from their Ethereum addresses; sometimes less so.

When you back the project, tweet @im_po_ss_ib_le to help us match you up with your contribution!

Impossible Object's books will exist at the intersection of crypto and legacy publishing. This means we'll be publishing innovative books the old-fashioned way, as trade paperbacks and eBooks. But we're also attempting something completely new: simultaneously releasing on the blockchain so that we can use crypto's capacities to help make new kinds of book.

Conversations on AI will be the first result of this experiment. Crypto has already provided solutions for crowdfunding fiction, science and music; now it's philosophy's turn. Backers of $IMPOSSIBLE will see the first ever philosophy book funded by crypto brought into the world.

Who's taking part in the conversations – and why are they about AI?

The initial impetus for the project was to assemble a group of pioneering thinkers so they could discuss a topic that all of their work has a stake in, and publish their discussions as a public good.

That group ended up comprising Reza Negarestani, Benjamin Bratton, Mat Dryhurst, Holly Herndon, Helen Hester and Nick Srnicek. And the topic that turned out to unite their interests was Artificial Intelligence.

These thinkers have previously dealt with AI from various angles: some have written about AI directly (Reza Negarestani's Intelligence and Spirit and Nick Srnicek's work on the political economy of AI), some engage with AI as a collaborator (Holly Herndon, Mat Dryhurst and SPAWN), while some have developed the notion of artificiality in itself as a means out of conceptual deadlock (Helen Hester and Benjamin Bratton).

In the three conversations on the topic, AI will act more as a crossroads than the sole focus. Our dialogists are fascinated by the impact that AI will have on politics, art, philosophy, education, terraforming, and many more things, meaning that although the dialogues may consistently pass through AI, they will almost certainly end up at surprising destinations.

And in what way is this a 'new kind of book'? First, as mentioned already, it's the first ever philosophy book funded by crypto. Second, we will use the $IMPOSSIBLE token to steer the book through at least two distinct editions. After the first 'beta' edition, we will seek responses to the dialogues, which will be rewarded with $IMPOSSIBLE and published in all later editions.

This book will not be a static object, but instead a fluid one that uses the decentralised logic of the blockchain to open up new possibilities for collaboration. More on all of this below.

Reza and Impossible Object's short essay on the themes of Conversations on AI can be found here.

Reza Negarestani is a philosopher and a former systems engineer. He originally became known for pioneering his pioneering work of theory-fiction Cyclonopedia (2008). Since the early 2000s, he has contributed extensively to journals and anthologies, and lectured at numerous international universities and institutes including Duke University, MIT, École Normale Supérieure, and Haus der Kulturen der Welt among others. Negarestani’s writings have been translated into twelve languages. Negarestani’s latest philosophical work is Intelligence and Spirit(Urbanomic/Sequence Press/MIT, 2018), a book investigating the meaning of intelligence at the intersection of artificial intelligence, philosophy of mind, theory of computation and the philosophy of German Idealism.

Benjamin Bratton's work spans Philosophy, Art, Design and Computer Science. He is Professor of Visual Arts at the University of California, San Diego. He is Program Director of The Terraforming programme at Strelka Institute of Media, Architecture and Design in Moscow. He is also a Visiting Professor at The European Graduate School, SCI_Arc (The Southern California Institute of Architecture) and NYU Shanghai. He is the author of several books including The Revenge of The Real: Politics for a Post-Pandemic World (Verso, 2021) and The Stack: On Software and Sovereignty (MIT Press, 2015).

Holly Herndon operates at the edge of electronic and avant-garde pop music and emerges with a dynamic and disruptive canon of her own. On her most recent full-length album PROTO Herndon fronts and conducts an electronic pop choir comprised of both human and AI voices over a musical palette that encompasses everything from synths to Sacred Harp stylings. CNN noted that Herndon is 'shaping the future of AI' and she has demonstrated this nexus of technological evolution and musical catharsis with elevated performances at The Barbican (London), Volksbühne (Berlin), Sónar (Barcelona), Unsound (Krakow), and Club 2 Club (Milan). The sounds synthesized on PROTO by Herndon, her AI “baby” Spawn, and the vocal ensemble combine elements from Herndon’s dynamic and idiosyncratic personal journey: the timeless folk traditions of her childhood experiences in church-going East Tennessee (particularly the prismatic layered practice of Sacred Harp singing), the avant-garde music she explored while at Mills College, and the radical club culture of Berlin, all enhanced by her recent PhD composition studies at Stanford University, researching machine learning and music. Herndon co-founded the podcast series Interdependence alongside Mat Dryhurst.

Helen Hester is Professor of Gender, Technology and Work at the University of West London. Her research interests include technology, social reproduction, and the future of work, and she is a member of the international feminist working group Laboria Cuboniks. Her books include Beyond Explicit: Pornography and the Displacement of Sex (SUNY Press, 2014), Xenofeminism (Polity, 2018), and After Work: The Politics of Free Time (Verso, 2022, with Nick Srnicek).

Nick Srnicek is a Lecturer in Digital Economy at King's College London. He is the author of Platform Capitalism (Polity, 2016), Inventing the Future: Postcapitalism and a World Without Work (Verso, 2015 with Alex Williams).

$IMPOSSIBLE is the token that backers of the crowdfund will receive in return for their contributions of ETH.

If you're already familiar with Mirror crowdfunds and how they differ from regular crowdfunds, that won't need any explanation. But if you're new here, here's a lil explainer:

When will the conversations happen?

As soon as the crowdfund is over! We can't wait.

After that, the publication of the book will occur in two stages.

Once the conversations have all taken place, they'll be published on Mirror as a 'beta' eBook of approximately 50,000 words – equivalent to about 200 printed pages. This will be free for all to read.

This is where things really start to get interesting.

Before the trade paperback is published, Impossible Object will seek responses to the dialogues from their first readership. The call for proposed responses will be open to all readers, not just holders of $IMPOSSIBLE. One to three of these will be published alongside the main dialogues in the first full print and electronic edition of the book, and the authors will be rewarded with $IMPOSSIBLE tokens.

Also, the names of the original backers and holders of the $IMPOSSIBLE token will be included the acknowledgements and logged forever on the blockchain in recognition of the role they played in making the book happen.

Printing commentaries and objections alongside the main text has a long tradition, stretching back before Descartes' Meditations. But with Mirror's help we're giving things a web3 twist.

Our seeking responses to the book needn't stop there. Impossible Object will retain some $IMPOSSIBLE tokens to send to authors of future responses, which would also be published in further editions on the book.

Who will design Conversations on AI?

We're excited to say that editorial design for the book and for Impossible Object's future titles will be by the incredible Metahaven.

Not only will Metahaven be doing editorial design for Conversations on AI; in line with a plan that will be repeated with future Impossible Object titles, the front cover image will be minted as a standalone NFT and auctioned a little further down the line.

Some of the proceeds of this will go to iODAO, Impossible Object's creator DAO.

How much are we aiming to raise?

What are the different tiers of backer rewards?

Futher information about the crowdfund

And finally, many thanks to The Generalist for the inspo on various elements of this crowdfund post.